Data during times of disaster: Why data-driven companies were better positioned to weather the Covid-19 crisis

A truly data-driven approach requires that you are prepared for the unexpected; to navigate difficult situations without an instruction manual to rely on. Rarely has this skill been more useful than during the Covid-19 pandemic.

It comes as no surprise that during a global, rapidly unfolding crisis, the need for external, reliable data has become even greater for certain companies. For others, the ability to weather the same crisis better than less data-focused organizations has simply proved that they are already on the right track. And in the case of businesses who have lagged behind when it comes to adopting data, the turmoil of 2020 has served as a wake-up call: now is the time to act, in order to be better prepared when the next crisis arrives. 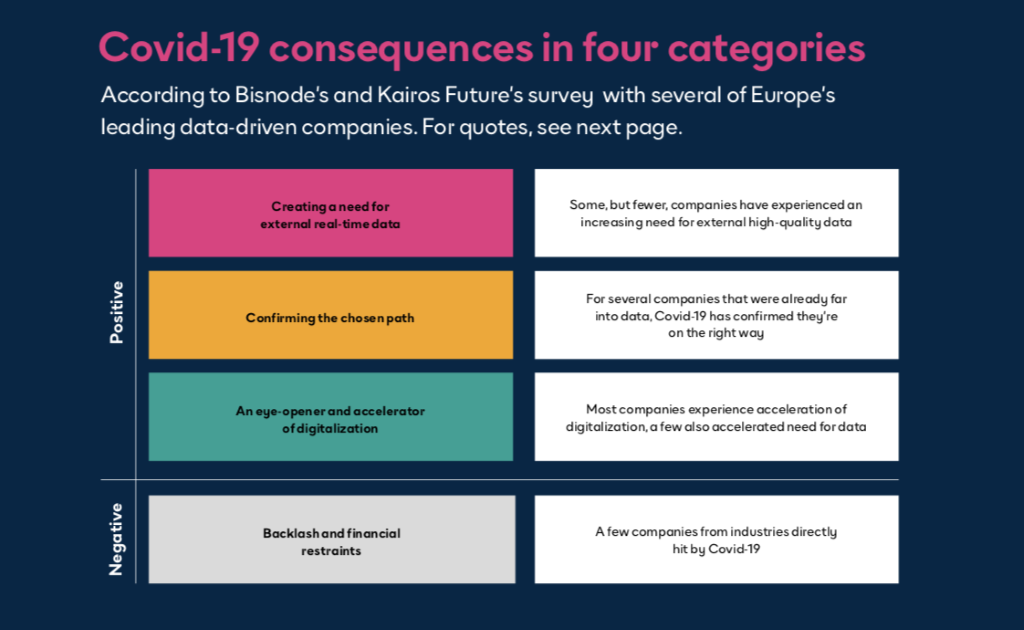 “The corona crisis has accelerated our digitalization, even though I think we were well positioned already before the crisis started. We have been forced to interact digitally with our external environment, and internally as well, within all areas in our organization”, says Ulrika Linné Åqvist, Marketing Director at Esri Sweden.

However, the financial hardships caused by the pandemic have also forced some to halt their investments in data analytics, and take stock of their current situation. “Now we need to ask ourselves the question: what have we done to transform our own area for real? That will become more important. Because it won’t be the case that money will flow in the coming two years, there will be fewer customers, and that will of course limit the access to money and the willingness to invest,” says Jari Virtanen, Chief Transformation Officer at Stena Line.

Working digitally has a positive impact

However, in the case of many organizations, the crisis has had a silver lining — or several. For example, Christian Linnelyst, Senior Marketing Manager at Ramböll reports that the impact in large parts of the organization has been “mostly positive”: “The company has seen that working digitally is very effective, we get much more things done and we have learned to work together in a new way,” using Teams, for example.

HB Nordström, Sales Director at Svea Ekonomi agrees: “In many organizations there has been a reluctance, you are used to your system solutions and such. But now many organizations have been forced into a digitalization which they are not used to and are thinking ‘Wow, this was much easier, or much more efficient’”.

Digitalization is the right path

Several companies, such as Stora Enso and Telia Sweden, note that they were very well positioned to face the crisis due to the fact that they were already far along on their data journey. For them, the pandemic has mostly served to underline the fact that they are on the right path; that digitalization truly is the future. And for those who didn’t realize this previously, 2020 has been a true eye-opener.

“We will, like other companies and organizations, benefit even more from data-driven insights in a world that is becoming increasingly digitally interconnected. Our analytical skills will need to be strengthened. We will use digital twins to test ideas and predict events. Linking geographical data to other types of data will become more and more valuable as global relationships play an increasingly important role. The ongoing corona pandemic has generated a broader understanding of that data-driven decisions will be crucial when finding solutions to common challenges” Ulrika Linné Åqvist, Marketing Director at Esri Sweden concludes. 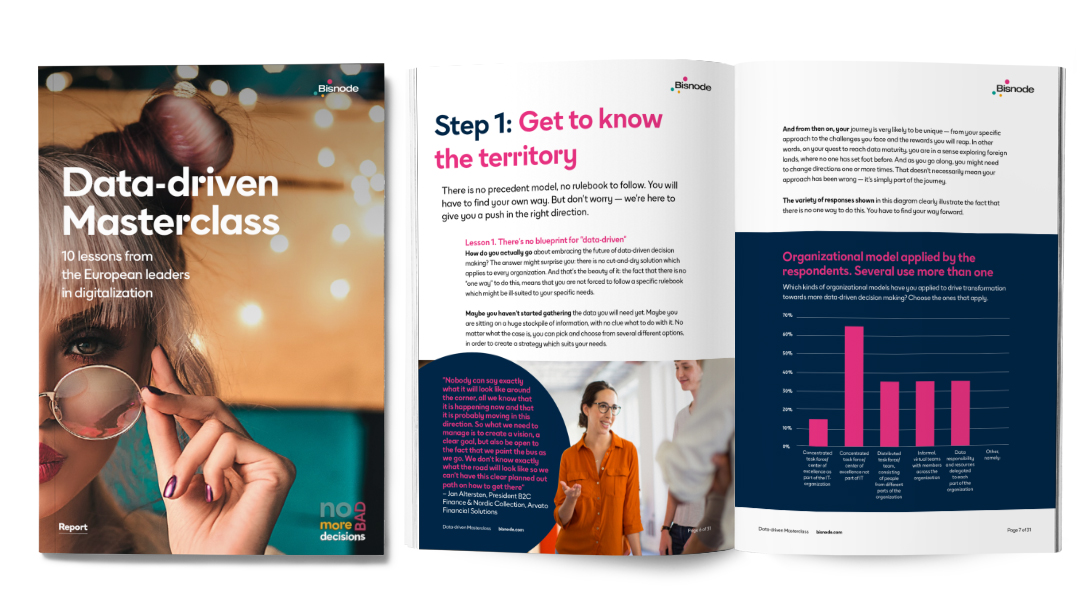 Do you want to deep dive into the topic of data-driven journey
To help you on your way, we’ve published the report “Data-driven masterclass: 10 lessons from the European leaders in digitalization”. These lessons are based on an extensive survey commissioned by Bisnode and conducted by Kairos Future, consisting of in-depth interviews with senior leaders in IT, data, marketing and business development functions in Europe.